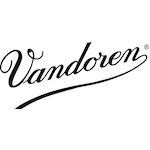 Since 1905, the VanDoren family has been making reeds and mouthpices. It all began with Eugene Van Doren, who was a clarinetist at the Paris Opera during the Belle Epoque at the end of the 19th century.

Vox is a musical equipment manufacturer which is most famous for making the Vox AC30 guitar amplifier, the Vox Continental electric organ, and a series of innovative but commercially unsuccessful electric guitars and bass guitars. Founded in Dartford, Kent, England, Vox has been owned by the Japanese electronics firm Korg since 1992.