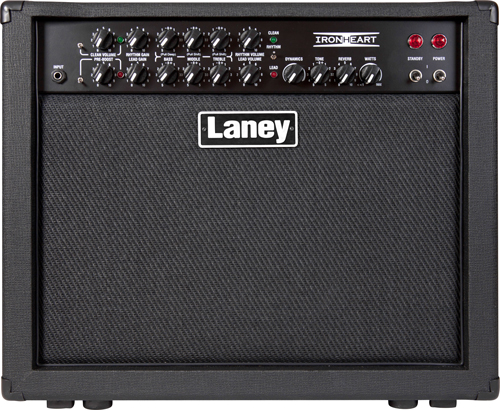 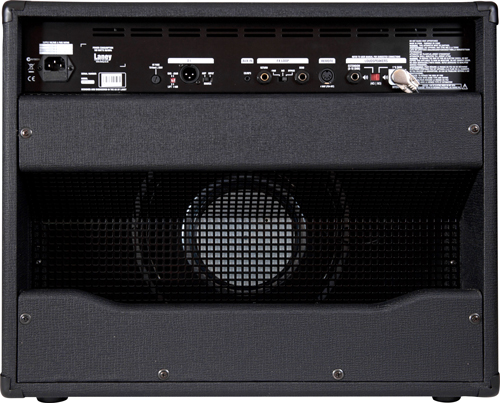 Let’s start off with the wattage. The current trend towards low wattage amps is mainly due to the fact that more people want easily accessible “cranked” tones, but at sane volumes. That’s all well and good but at gig volumes, the low watters can often run out of clean headroom, and pushing the smaller transformers hard can result in tone that’s muddy and mushy,­ not ideal.

The IRT30 circumvents this in a number of clever ways. First off, 30W means that there’s a little more “oomph” to your tone, and certainly a lot more clean headroom. Laney have designed a combo enclosure that’s about 2/3rds the size of a standard 2x12” cabinet ­ and, yes, this makes it a little bigger and a little heftier to carry around. But don’t worry ­ there are two solid metal grab handles either side of the amp to help you out. And most importantly, the larger box means more projection and bigger tone! However, it still fulfills the cranked amp at whisper volumes” criteria by incorporating a continuous wattage control ­ you can go from 30W right down to ~1W. And you can record this easily too there’s a DI out that can be switched from cabinet emulated to raw amp tone.

An ingenious but simple feature that Laney have also incorporated is a little tilt­back kick stand underneath the amp so you can make sure your ears can hear the amp, instead of your knees.

The most important thing to know about the IRT30­112 is that it takes some of its heritage from the glorious Laney AOR amps of the 80s ­ not so much in tone but in functionality. We’ve got 3 channels ­ clean, rhythm, and lead ­ simple enough, surely? But wait ­ EVERY single EQ knob has a push­pull function to unlock more tonal possibilities. So if you’re in the shop, trying out one of these guys, and you’re not instantly feeling “your” tone, first thing you should do is start pulling on everything!

There are a lot of options, and that can be pretty daunting. So here’s a handy quick guide to the functions that may not be immediately obvious:

BASS (push/pull) -­ Deep switch, gives you a boost in the low end for more thump.

MIDS (push/pull) -­ Mid Shift, shifts the effective range of the mid control. To my ears, it tightens up the tone and cuts some of the muddier low mids.

TREBLE (push/pull) -­ another shift control, it’s supposed to make the high end a bit rounder but to be honest I didn’t hear a huge difference personally. No matter, there are so many ways to shape your tone with this amp.

DYNAMICS - now here’s a tricky one! What on earth does this switch do?? To me it basically functions like a 5150s Resonance control (i.e. it’s a Presence knob for your low frequencies), with the added benefit that it can both cut AND boost.

Tone?,­ haha, yeah okay, now what?? This is a cool one ­ it’s a post­preamp EQ system, which works in a similar way to the Mesa Mark series graphic EQs. Once you’ve tailored your tone, gain structure and response with the normal controls, and you just want to fine tune your final tone, use the Tone control. It sweeps from emphasizing mids all the way up to a very classic “V” sounding scooped tone, and all without affecting your finely crafted gain structure!

With 3 channels (clean, rhythm and lead) and the multitude of tone shaping options, there’s almost no tone that you can’t approximate. You can go from lush, crystal cleans, to AC/DC crunch tones to high gain roar reminiscent of the classic 5150, all at the press of a footswitch! And much, much more ­ this review space is way too short to go through all of the tonal combinations that this monster can blow through. So let it suffice to say that in summary if you’re looking for a combo that can go from loud and proud to bedroom volumes, and span a wide range of tonal possibilities, go try this amp right now!