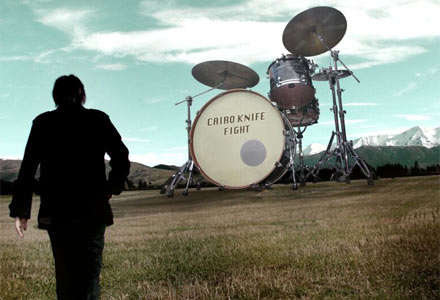 As a freelance percussionist Nick has also worked extensively with Kog Transmissions for live industrial groups such as Avotor and created electro-pop versions of Head like a Hole songs with Joost Langveld.

In 2001 Nick took up an Artist in Residence position at the Darpana Academy of the Performing Arts in Ahmedabad, India. The position involved studying South Indian folk music, writing soundtracks for a series of dance performances by the internationally renowned Darpana dance group.

Now Nick is part of the power duo that makes Cairo Knife Fight. An unrelenting wall of sound of loops, synth, guitar, vocals, and, of course, drums. They describe their own sound as akin to 'guerilla warfare'.  Audiences and critics find themselves 'sonically bludgeoned into smiling and dancing at the same time'.  Welcome to the world of Cairo Knife Fight.

The duo have already enjoyed high-profile support slots with Them Crooked Vultures, Foo Fighters, Gomez and Queens of the Stone Age as well as performing at CMJ and last year's SXSW.  With two highly acclaimed EPs and an album under their respective belts, Cairo Knife Fight might just be the band to put NZ rock back on the world map.  Watch this space.