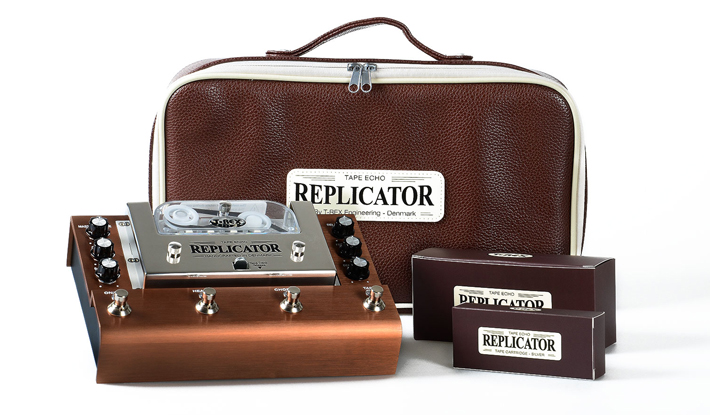 The first thing you notice about the T-Rex Replicator Tape Echo is that they (T-Rex) meant business when they made this thing. The build quality is immediately obvious and it has definitely been built with the rigors of touring pedalboards in mind. While the, slightly large, heavy aluminium enclosure isn’t completely ideal for modern day pedalboards, at least it can actually fit on one (There’s no way you’re going to get a Space Echo on your pedalboard) And the tape mechanism, cartridge& chassis has clearly (and impressively) been designed to take a bump or two without affecting the operation. Quite a few of the high-end delay pedals these days are relatively large as far as modern pedals go and this isn’t much bigger than the Line6 DL4 so can conceivably sit on a large pedalboard relatively easily. Included with the pedal is a second tape cartridge which shows great foresight on T-Rex’ behalf given that all analog tape will deteriorate with time eventually, and if you are a true analog delay fan you will no doubt be wearing the tape on these cartridges quickly enough. They’ve even thrown in a few cotton buds to assist (and probably remind) you to regularly clean the tape with isopropyl alcohol which greatly extend the life of the tape.

The tape mechanism is based on 2 heads which the first is used for longer delays (250ms to 1,200ms) and second is used for short delays (125ms to 600ms). You can use either of these on their own or both at the same time, all conveniently controlled with a footswitch. Above the switch is an LED light which tells you what head you are using by changing colour, green to indicate head 1, red to indicate head 2 and orange to indicate you are using both. You can set the time with the Delay Time control knob or tap it in with the very convenient Tap tempo switch. The tempo dictates the time of head 1 while head 2 is double the time length of head 1. The other control options are Master Volume (with up to a +20db boost!), Chorus (which gives you classic slight time variations to get that old school ‘warbling’ chorus effect), Feedback, Saturate and Delay Level.

The Saturate control is definitely one of the highlights of this pedal as it allows you to set the level of the signal hitting the tape with which you can generate all of the dirty, overtone rich sonics that most digital analog delay simulators will never achieve. It takes some experimentation to find where the best spots are, depending on what kind of signal you put into it, but there are a huge array of great tones in this pedal if you spend some time with it because of this feature.

The Feedback is also a great weapon on this pedal and, while it can be quite sensitive at your first attempt at it, with some more experimentation you can find the spots just before it gets too out of control and there is a lot of fun to be had with that. You can find that perfect amount of feedback where it sits on the edge of feeding back on itself so you can create massive textures/slabs of sound, building on more and more melodies forming virtual orchestras of guitar. And you can always drag the Feedback out (a la the ending of Paranoid Android) and get it to go into full overdrive mode which is equally as much fun. What makes this pedal that much better is the fact that you can control the Speed and Feedback with optional expression pedals which can give you an amazing amount of hands free control over the operation of the coolest aspects of this pedal.

I can see this pedal being used as much in a studio as a piece of outboard gear as much as it will get used on pedalboards for guitarists. One of the options this has that suggests this to me is the Kill Dry switch which obviously kills the dry signal leaving you with just the delay output signal on its own. This was what I spent the most time on with my first try with this pedal and I can see it being used to create many ambient walls of sound with possibly a huge selection of instruments going through it.

All in all this is a massive triumph for T-Rex in the never ending attempts in trying to recreate those classic tape echo sounds originally generated by the Space Echos and Wem Copycats of the golden days of tape recording. The real tape effects that you can’t accurately create with digital simulations like the ‘wow’ and ‘flutter’, that are unpredictable in their nature but are the reasons that make it sound so good, make the price tag of this pedal well worth it.

- Jeff plays in legendary band Jakob. Check them out www.jakob.co.nz & www.facebook.com/jakobmusic You will not be disappointed.