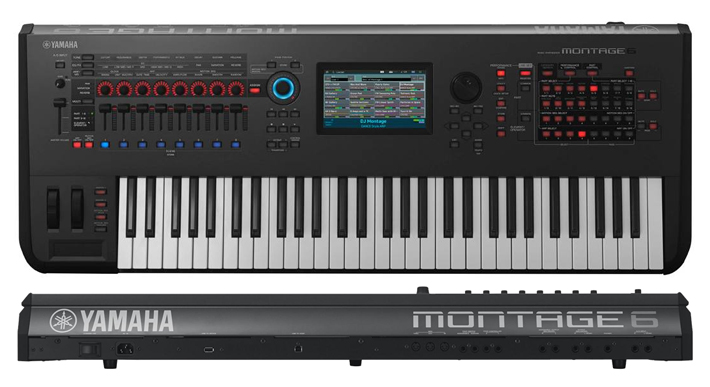 Montage is the latest evolution in Yamaha’s Workstation/Performance Keyboard line and also features a modern update to Yamaha’s ground-breaking DX synthesizers. For us lucky synth players that means there are TWO synthesizer engines in the Montage - Yamaha’s flagship AWM2 (Waveform and Subtractive synthesis engine) and the all-new FM-X (Frequency Modulation synthesis engine).

Available in 61 and 76-key synth keyboard options and a full 88-weighted key option the Montage has studio and stage players covered. The control panel borrows the classic Motif layout which previous Motif users will appreciate. The new fully assignable buttons and sliders have a positive response and now feature real-time backlit LED indicators, which is ideal in low-lit areas and general function tracking. The big change on the control panel is the new backlit colour LCD touch-screen which makes all programming and navigation extremely easy, especially with the new FM-X functions.

For anyone who has owned or had the opportunity to program a DX/TX series synth, Montage’s FM-X synthesis workflow with its fluidity and intuitive interface is what users, old and new, have been waiting for. This is genuine FM, no modelling or sampling – it’s the real deal and it sounds amazing.

For those familiar with FM synthesis, the FM-X synth looks like this: 8 Operators, 88 Algorithms, Sine, Saw, Square and Pulse Waveforms, Filter Control, Spectral Resonance Control, Frequency Envelope, ADSR Envelopes, 3-Band and 2-Band EQ (per part), LFO (per part) plus a master LFO. All parameters are visible and controlled via the front panel and touch screen – it’s never been easier. If you’re a classic DX/TX user, you can convert your existing patch library to FM-X compatible files using the online Yamaha FM Converter. Plus, you can combine your FM patches with the AWM2 sounds, add effects and apply motion sequences and arpeggios for incredibly full, rich and unique sounds that are impossible to achieve on any other synthesizer.

Montage’s AWM2 engine has almost 10 times more waveform capacity than the Motif XF which allows for greater complexity in the creation of sounds but also in the performance of sounds. These sounds can be altered in real-time with the many performance parameter controls on the front panel, which can change tuning, panning, effects levels and balances. It is possible to control multiple parameter changes simultaneously and cross-fade between two different sounds in real time as well.

Bottom line: I was expecting just another Motif update and was pleased to experience a completely new machine. As always, the acoustic samples are arguably the best from any synth and the dual-synth engine uses all of the best AWM2 sounds seamlessly with the newly developed FM-X sounds. The effects integration makes the Montage a powerful studio keyboard while the newly updated control panel offers the performing musician better control and flexibility. I’d have this for the FM engine alone and the AWM2/FX engines would take care of any studio or band project right out of the box. The new Montage is a must have future classic.