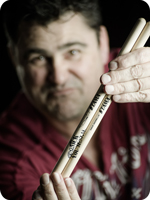 Dave Morello – Have no fear
By Andrew Healey

“Have no fear” is advice Dave Morello offers up and coming drummers.”  Drums are not a timid instrument – don’t be afraid to hit them.” Morello  practices what he preaches. As the man behind the drum kit for Auckland Atomic-Rock rockers  Fuser and Valedictions, he’s an explosive, animated force –     known for putting on a show. “I put all my energy into it… I play and look like I’m really having fun. I am…

I  really enjoy what I do.”

Hailing from Kamloops B.C Canada, a very young Morello seemed destined to become a drummer: his friend’s father played drums in a band that performed concerts at his primary school, and Morello was allowed to play on the kit of a family friend. His earliest drumming memory is as a four year old pounding out a beat on his mother’s  pots and pans. When aged eighteen, Morello attended Canada’s equivalent  of World famous Berkley – Vancouver’s Capilano Music College. “It was like fame,” he  recalls. There he was tutored by some of Canada’s top session musicians   and played with four different bands at once. “I learned valuable skills like   comping,” Morello explains: “Comping is learning to play along with other  instruments – you can have twelve musicians on stage sounding like shit, or twelve that sound brilliant – it’s because those musicians comp.

At Capilano, Morello, and a fellow student formed a band called The Running. Together they produced an album that yielded a top twenty single in the Canadian charts. He was also employed as Musical Director of a government funded programme for the development of young musicians. In 1997 Morello immigrated to New Zealand. His ties remain strong to Aotearoa, and has no immediate intentions to move. I ask if moving to New Zealand from a much larger country has been detrimental to his career. He doesn’t believe so. “There are many more venues and opportunities over there, but the competition is much bigger,” he explains: “it’s just as hard to make it in Canada as it is in New Zealand.”

Since moving to New Zealand Morello has played for many bands like FUSER, Spinner, Running House, Valedictions and Siren Junkies worked as a session drummer with artists like Tim Mahon (Blam Blam Blam) and The Topp Twins. He also Produced recordings for several local artists. “I describe myself as a guitar players’ and singers’ drummer. I always fit my licks around the melody lines,” says Morello. He lists a variety of drummers as influences, usually for one aspect of their drumming: Stuart Copeland for hi-hat work, Mick Fleetwood for toms. “I love Keith Moon for his ability to express himself and try licks beyond his ability – he always had a way of coming out of it,” he enthuses. 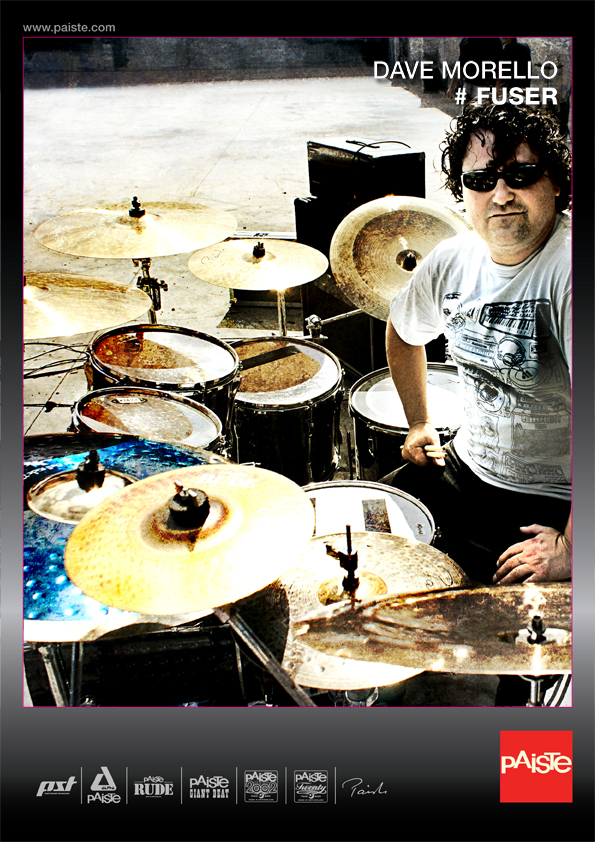 In 2008, Dave’s skill and passion for music earned him a highly sought after A-level endorsement from Swiss Cymbal manufacturer Paiste. In 2013 Morello was also awarded with a TAMA Drums endorsement . He plays a sexy Birch Bubinga Starclassic and of course, Paiste cymbals.

Morello is also very active musically at a local level, sponsoring events through his company Rock You Mental… with long time sponsors Musicworks. As Dave puts it:

"Drummer's deserve to be spoiled"

Morello is also a Producer, and I put it to him many musicians don’t actually know what a producer does. His explains his method is listen to the song, discuss with the musicians about what they want, get a picture as to how he feels the song should sound and then sell the idea to the band. It’s important to find an engineer that he can communicate with. He believes in achieving the desired sound from the source, so rather than recording the sound and adding effects and EQ later, Morello records the instrument how he wants it to sound from the beginning by using the correct microphones and placement. Politics mustn’t be overlooked. “You have got to be the one to kiss the guitar player’s ass – most producers are fired before the recording is finished,” he laughs.

Morello’s main project Fuser, is keeping him very occupied. The band is now promoting the songs on their second album World Of Make Believe. The band is enjoying success over-seas thanks to a handful of on-line marketing and licensing deals won through their long-time Manager and Record Company DO IT Records, based in New Zealand and L.A.

“Drums aren’t just an instrument that sits in the back. I’ve got to play within the limitations I’m allowed, but I stretch them as much as I can,” says Morello. Fear what’s that? When it comes to drumming, this Canadian import doesn’t know the meaning of the word.